Like I said in the previous post, the anniversary is fuzzy. I didn’t buy the smallblueyonder domain until late March of 2013. Then, there were several weeks of confusion as various WordPress issues were resolved. The site wasn’t truly up and running until mid April of 2013. But! I backdated several dozen comic posts because I wanted some volume in the archive. The first post says March 12, so… I guess that’s the official anniversary, however random it may be. Happy Birthday, Small Blue Yonder!

Hey, do you wanna see what 365 strips look like when they’re all stacked up? 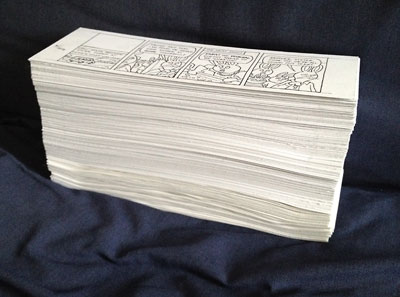 Boy, that’s a lotta strips. Wow, right?
What’s in store for the next year? Hopefully a collection of strips in book form, maybe a print or two. Basically, you know, vend some wares. Maybe sit behind a table at a con? Could happen. Keep your eyes peeled for updates.

Thanks so much, faithful readers, for checking in every day to see the latest. Thanks for spreading the word. The last year was fun, hopefully the next year will be even more fun!